Last night I dreamt of trains; of the past and of the present. No, my subconscious was not preoccupied by the ones of the future and that is not without meaning.
Steam locomotive hauled cargo-bourn squealers and bogies, passenger carrying luxury carriages with all the long-gone glitz and glamour of another era.
Then the Metropolitan tube-type ones that converge and disperse forming underground labyrinths that connect the bustling city above, the grande vitesse ones travelling at phenomenal speeds from one end of the country to the other.

“Life is a train of moods like a string of beads; and as we pass through them they prove to be many colored lenses, which paint the world their own hue, and each shows us only what lies in its own focus.” - Ralph Waldo Emerson.

I remember enjoying the scenery whilst sipping on mint tea in the velvet-dressed dining car of the Orient Express (not to be confused with the Venice Simplon OE that continues to run). I was being softly lulled by the rattling and rocking of the rail joints every now and again. The only annoyance was the constant giggling of a lady whom I could not see from my window seat and the occasional thick cloud of smoke that exuded from a co-passengers’ cigar. Waving it away, I notice my sleeve and then I glance down at my chest. I am wearing Elsa Schiaparelli chiffon and I can smell the unmistakable no. 5. The year is 1929 as far as I can discern from a neglected newspaper across the next dining table; my accent suggests I am British and I have just overheard that the journey of the carriage is London-Paris-Constantinople.

At the realization of this new found identity, the smell, the sound and the feel of my surroundings start to change; I am on a platform with a map in my hand while people, voices and vibrations are spinning around me. There is brick and metal, and addlepated souls, shifting from one line to another in a frantic dance. Their faces are indifferent, critical, livid and unwelcoming, and they blur in and out of focus; and then I get the sense that I am lost, I am actually totally unaware of where I am.

You are now permitted to panic.

Look at the map!
Concentrate, and look at your map. Where was it you were going? Think!
No that is a difficult one, let’s try: where are you now? Perhaps that is an easier one to crack.

The sign on the platform says ‘Gare du Nord’ and it begins to become clearer now. Paris.
I suddenly have an unsettling feeling that I do not have my 3.20Euro billet and 4 persons in green outfits have locked me in target from the furthest end of the platform. Damn, I could have sworn I am not responsible for this predicament! There must be someone else to blame, but not enough time to be playing ‘Point the Finger’. The only escape route is to get in to the approaching train. Success, but 50euro shorter in self-respect.

So I guess I should be headed for Constantinople, but I would much rather travel by sea there. The Bosporus gleaming, the gulls squawking, hovering over the waters’ surface hoping for a careless shallow swimmer.  But that is not my destination, I have been there before, I have tasted its offerings, and seen its sights, it cannot be that I should be returning.

The dream ends and I am left with a poignant thought: a comfortable past, a disheveled present, and no insight of the future.  I guess that makes it much more exciting, don’t you? :) 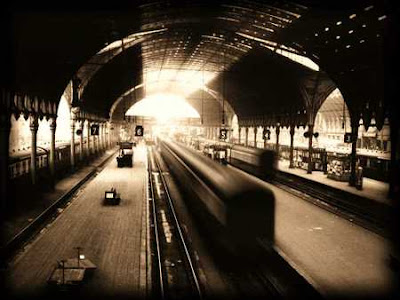 Food for thought: Trust your dreams, your mind knows yourself more than anyone.

What do you think? x Ra-Ra